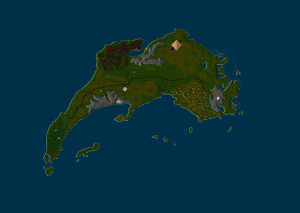 A map of the mysterious Rondorin.

A previously uncharted landmass has been discovered by a construction team working on the Nujel'm Mine! It is thought that this remote continent was once part of the Kingdom of Rondorin, part of the Lands of the Feudal Lords. In honour of the land's former rulers, the workers who discovered it have given it the name Rondorin.

When those who discovered it attempted to return from Rondorin to Nujel'm via the mine, the construction team soon found the way completely blocked by all manner of aggressive Elementals, who have apparently been drawn to the precious metals unearthed by the miners. All workers have now fled the mine, leaving the construction team trapped in Rondorin.

The treacherous ocean tides that constantly swirl around Rondorin make putting to sea there impossible.

The highly skilled construction team which is stuck in Rondorin have put their time in isolation to good use and have developed advanced methods of housing construction! One may speak to the self proclaimed Real Estate Broker of Rondorin to learn how to acquire a plot of land there and build a Custom House.

Custom Houses placed on Rondorin do not count towards an account's normal house limit, the only barriers are cost and available space.

Unlike the rest of Britannia, houses/plots on Rondorin may be placed on slightly bumpy/uneven terrain, allowing more of the continent to be built on.

Rondorin is home to two of the Champion Spawns located within the world.