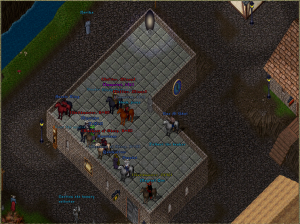 The roof of West Britain Bank is a trading/banksitting area where all combat, spells, and skill use is disabled.

Players and NPCs (including enemy Faction Guards) on the streets of Britain around the bank are unable to harm those up on top of the Bank Roof.

There are gates with a 3 second delay leading to the Bank Roof in Ocllo, Bucc's Den, and Britain itself. These gates have both criminal and combat checks on them to prevent them being used by someone to escape.

As all spells are disabled on the roof, players cannot cast recall, mark, or gate travel.

Use the dark-grey Moongate on the roof to leave via the Town Moongates.

The gate system has been designed in this way to ensure that players cannot quickly enter or re-enter the safety of the roof without first entering unsafe areas.

Players can use the [afk command whilst on the roof to let others know they are away. An optional message may be included.

The Bank Roof functions as an Inn and players may logout instantly on top of it.

Characters who logout on the Bank Roof will remain in the game after they have logged out for an extended period of time.

The character will remain stationary and nothing that happens to it while the player is offline will be saved. Or in other words, the player will log back into their character and find it exactly how they left it when they logged out.

Characters will continue to lose Hunger points while on the roof, however they will not begin to suffer the effects of starvation until they leave the roof.