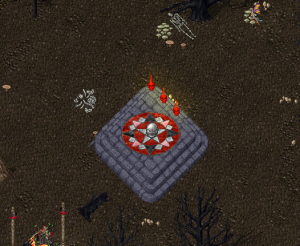 The altar of a Champion Spawn, with red candles and a red pentagram indicating the spawn is currently active.

A Champion Spawn (aka. Champ Spawn or Champ) is one of the greatest tests of a player's strength and ability. Only the bravest and most skilled adventurers are able to complete a Champion Spawn, yielding great wealth and coveted treasures!

There are currently three active Champion Spawns throughout the world:

Champion Spawns are a 5-phase battle that progressively becomes more difficult as the spawn nears completion. Each phase of the battle is completed by conquering the monsters spawned in the area around the altar. Once a number of monsters have been slain, candles will appear at the altar to indicate the progress that has been made on the active spawn.

The earlier phases of a spawn require more monsters to be slain, however they are generally easier to defeat. As the spawn progresses fewer monsters are required to be defeated, but the difficulty of the monsters increases significantly.

Once 4-phases of monsters have been defeated, the candles at the altar will disappear and a Champion will be spawned!

Each Champion varies in its difficulty and special abilities. Once the Champion is defeated, vast amounts of gold will be released upon its death and players who have participated in the phases and killing the Champion will be rewarded with coveted treasures such as Power Scrolls and rare items.

Players who do more damage throughout the phases and to the Champion itself will have a higher chance of receiving the scrolls and rare items upon the Champions death. However, if you die during the phases or the final battle - your damage counter will be reset!

Champion Spawns can be completed by a solo adventurer, or by teaming up with other players.

Spawns can be 'reset' to usher in a different Champion by using the Valor virtue on the altar.